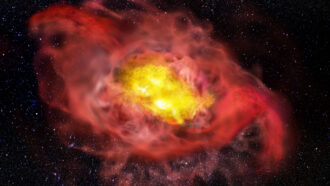 PASADENA, Calif. — A lucky celestial alignment has given astronomers a rare look at a galaxy in the early universe that is seeding its surroundings with the elements needed to forge subsequent generations of stars and galaxies.

Seen as it was just 700 million years after the Big Bang, the distant galaxy has gas flowing over its edges. It is the earliest-known run-of-the-mill galaxy, one that could have grown into something like the Milky Way, to show such complex behavior, astronomer Hollis Akins said June 14 during a news conference at the American Astronomical Society meeting.

“These results also tell us that this outflow activity seems to be able to shape galaxy evolution, even in this very early part of the universe,” said Akins, an incoming graduate student at the University of Texas at Austin. He and colleagues also submitted their findings June 14 to arXiv.org.

The galaxy, called A1689-zD1,­ shows up in light magnified by Abell 1689, a large galaxy cluster that can bend and intensify, or gravitationally lens, light from the universe’s earliest galaxies (SN: 2/13/08; SN: 10/6/15). Compared with other observed galaxies in the early universe, A1689-zD1 doesn’t make a lot of stars — only about 30 suns each year — meaning the galaxy isn’t very bright to our telescopes. But the intervening cluster magnified A1689-zD1’s light by nearly 10 times.

Akins and colleagues studied the lensed light with the Atacama Large Millimeter/submillimeter Array, or ALMA, a large network of radio telescopes in Chile. The team mapped the intensities of a specific spectral line of oxygen, a tracer for hot ionized gas, and a spectral line of carbon, a tracer for cold neutral gas. Hot gas shows up where the bright stars are, but the cold gas extends four times as far, which the team did not expect.

“There has to be some mechanism [to get] carbon out into the circumgalactic medium,” the space outside of the galaxy, Akins says.

Only a few scenarios could explain that outflowing gas. Perhaps small galaxies are merging with A1689-zD1 and flinging gas farther out where it cools, Akins said. Or maybe the heat from star formation is pushing the gas out. The latter would be a surprise considering the relatively low rate of star formation in this galaxy. While astronomers have seen outflowing gas in other early-universe galaxies, those galaxies are bustling with activity, including converting thousands of solar masses of gas into stars per year.

The researchers again used the ALMA data to measure the motions of both the cold neutral and hot ionized gas. The hot gas showed a larger overall movement than the cold gas, which implies it’s being pushed from A1689-zD1’s center to its outer regions, Akins said at the news conference.

Despite the galaxy’s relatively low rate of star formation, Akins and his colleagues still think the 30-solar-masses of stars a year heat the gas enough to push it out from the center of the galaxy. The observations suggest a more orderly bulk flow of gas, which implies outflows, however the researchers are analyzing the movement of the gas in more detail and cannot yet rule out alternate scenarios.

They think when the hot gas flows out, it expands and eventually cools, Akins said, which is why they see the colder gas flowing over the galaxy’s edge. That heavy-element-rich gas enriches the circumgalactic medium and will eventually be incorporated into later generations of stars (SN: 6/17/15). Due to gravity’s pull, cool gas, often with fewer heavy elements, around the galaxy also falls toward its center so A1689-zD1 can continue making stars.

These observations of A1689-zD1 show this flow of gas happens not only in the superbright, extreme galaxies, but even in normal ones in the early universe. “Knowing how this cycle is working helps us to understand how these galaxies are forming stars, and how they grow,” says Caltech astrophysicist Andreas Faisst, who was not involved in the study.

Astronomers aren’t done learning about A1689-zD1, either. “It’s a great target for follow-up observations,” Faisst says. Several of Akins’s colleagues plan to do just that with the James Webb Space Telescope (SN: 10/6/21).