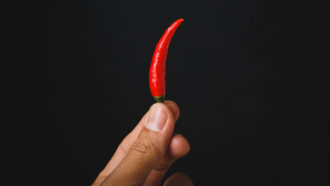 Some touching research took the 2021 Nobel Prize in physiology or medicine. David Julius of the University of California, San Francisco and Ardem Patapoutian of the Scripps Research Institute in La Jolla, Calif., were awarded the prize October 4 for their research to identify sensors on nerve cells that detect heat, cold and pressure.

The laureates discovered proteins called receptors that turn the burning heat from chili peppers or a hot stove, menthol’s cooling sensation or the pressure from a hug into nerve signals that can be sent to the brain. Those proteins are crucial to the sense of touch and for feeling pain.

Recognizing basic research on touch is important because “it’s such an elemental function of the nervous system, which is how we react with our environment,” says Walter Koroshetz, director of the U.S. National Institute of Neurological Diseases and Stroke in Bethesda, Md.

The temperature sensors warn of danger from fire or extreme cold, said Abdel El Manira, a neuroscientist and a member of the Nobel Assembly of the Karolinska Institute, which awards the physiology or medicine prize.

Scientists had been searching for touch and temperature receptors for many years before Julius and Patapoutian began their work, Koroshetz said. “Everybody knew [the receptors] were there, but nobody could find them,” he says. Then the two laureates came up with some clever ways to probe for the elusive proteins.

Julius, a biochemist and molecular physiologist and Howard Hughes Medical Institute trustee, used capsaicin, the compound that gives chili peppers their heat, to discover receptor proteins that allow people to feel chili’s burn. He then found that the receptor, TRPV1, also responds to heat. The protein is an ion channel, a type of molecular gate nestled in a cell’s membrane that opens or closes to control the flow of charged atoms or molecules into or out of the cell. In this case, when TRPV1 encounters capsaicin or heat, it opens, allowing charged calcium ions into the cell. That flood of calcium triggers electrical signals that are sent to the brain to warn of hot stuff.

After spending about a year poking nerve cells in lab dishes, Patapoutian also discovered a receptor protein, PIEZO1, that opens in response to mechanical pressure. That protein, named after the Greek word for pressure, and another called PIEZO2 allow people to feel touch (SN: 12/4/14).

PIEZO2 is the receptor on nerve cells in the skin called Merkel cells that sense light touches and caresses (SN: 6/18/09). It also helps nerves in the lungs keep the organs from overinflating and is important for bladder and bowel functions (SN: 12/21/16).   Children who lack PIEZO2 have balance problems and can’t feel where their limbs are, Koroshetz says. “They have to look to see where their fingers are when they reach out to grab something.”  Abnormal pressure sensing may contribute to glaucoma and high blood pressure, too.

Ardem Patapoutian’s search for the receptors responsible for sensing touch led him to test over 70 genes. Number 72 finally wielded results — earning him half the 2021 Nobel Prize in physiology or medicine. BBVA Foundation

Touch and temperature receptors may also be involved in processing pain. But despite the potential for drug development, pharmaceutical companies have struggled to develop new treatments using these channels, says Gary Lewin, whose lab at the Max Delbrück Center for Molecular Medicine in Berlin studies the molecular physiology of somatic sensation.

A major stumbling block comes from the fact that drugs targeting TRPV1, the receptor involved in sensing heat, tend to induce fever. Other closely related receptors may be more promising, says Lewin. “Both discoveries really boosted the field of pain research. But we’re really at the beginning — there’s a huge amount still to be discovered.” Treatments based on these receptors could provide an alternative to addictive pain medication, like opioids.

Julius and Patapoutian will split the prize of 10 million Swedish kronor, or more than $1.1 million.