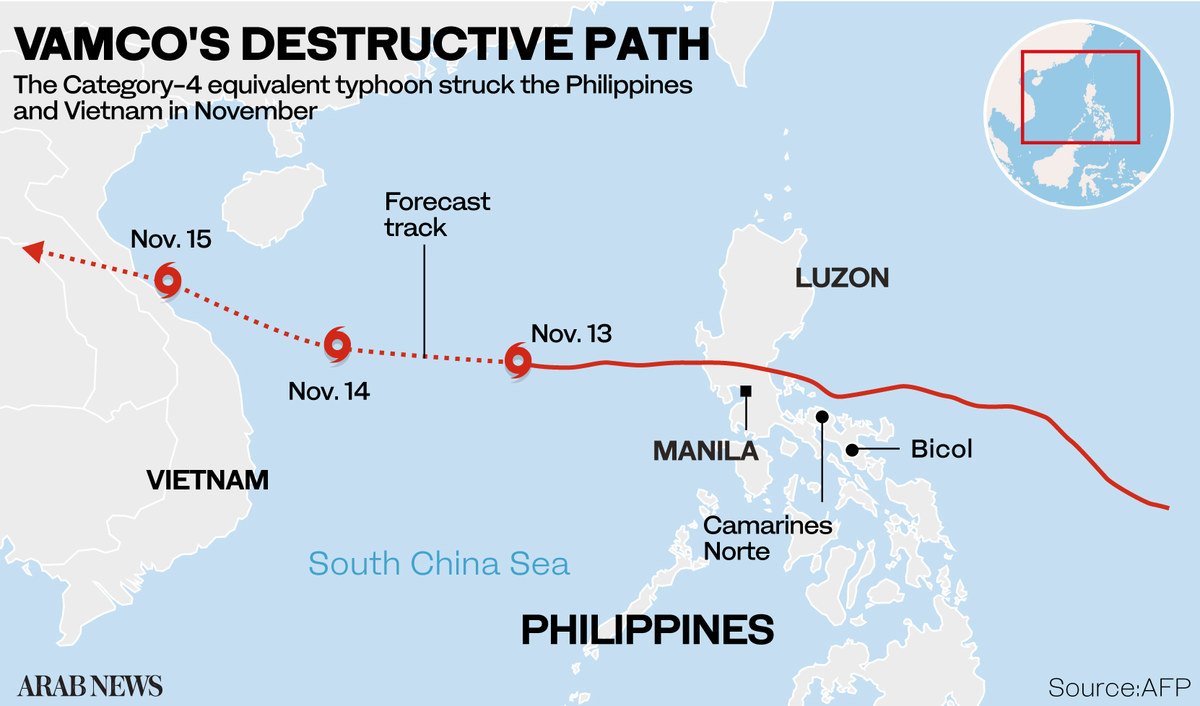 DUBAI: Weeks have passed since Typhoon Vamco tore through the Philippines, yet the human and material devastation left in its wake continues to be felt strongly by people who were in the storm’s path — and by far-flung overseas Filipino communities as well.

Vamco, known locally as Ulysses, killed at least 67 people after hitting the Philippines on Nov. 11. Dozens more were injured when heavy downpours caused flash flooding and mudslides. Storm surges left some areas submerged in Luzon, one of the country’s three main island groups. “My family is still trying to get mud out of our house,” a Filipino migrant worker in Dubai told Arab News, recalling the horror that was visited on her relatives when heavy rains and winds of up to 213 km/h lashed the Pacific islands.

“It will take us months to fully recover from the typhoon’s impact. It’s difficult being away while they’re experiencing this.”

Local authorities estimate that about 3.8 million of the nation’s 100 million people were severely affected by the disaster and around 350,000 were evacuated from their homes.

At least 110 people have been killed in recent weeks as Typhoons Molave, Goni and Vamco cut through Manila, Bicol, the Cagayan Valley and other parts of Luzon.

While the Philippines takes stock of the human and material damage caused by Vamco, the roughly 2.3 million Filipino migrants living and working abroad — a large proportion of them in Saudi Arabia and the UAE — wait anxiously for news from home.

For, in addition to Vamco’s havoc, the country is grappling with the economic and social impacts of the coronavirus pandemic, which has infected around 448,300 people and killed at least 8,730 as of mid-December, according to Johns Hopkins University figures.

“The night of the typhoon, my family was messaging me constantly about how the rain wasn’t stopping, and that they were monitoring the water level,” Dara de Guzman, a Filipino who moved to Dubai in 2016, told Arab News.

De Guzman’s family lives in Marikina, about 13 kilometers northeast of the capital Manila. The city experiences periodic flooding owing to its low-lying topography, a problem that has been compounded in recent years by illegal logging and quarrying in the region.

“I was in constant communication with them throughout the night, and they were already sending messages asking to pray for them,” de Guzman said, recalling her mental state while being thousands of miles away from her dear ones.

“I really wanted to go home. I felt so helpless, and the best thing I could do was to make sure I knew what was happening.”

Gripped by similar emotions, many Filipinos in the UAE felt they must do something to help their distant countrymen — such as holding vigils and encouraging individual acts of charity.

One former Filipino community leader in Dubai, who did not wish to be identified, said he noticed several social media posts aimed at raising funds and seeking donations to support those affected by the typhoon.

It was only natural for overseas Filipinos to come together in a time of crises, he said, just as they did in January this year when the Taal volcano in Batangas province erupted, spewing ash across swathes of the country, grounding flights and forcing schools to close.

“Nakakatakot dito kuya (It’s scary here),” my sister wrote via Facebook Messenger when I pressed her for news about our family on the night Typhoon Vamco hit the Philippines. Heavy rains accompanied by high winds caused the roof of our house in Manila to make creaking noises as though it was about to be blown away any moment, she said. In the end, mercifully the house suffered no damage and there was no heavy flooding in my family’s neighborhood.

I could only imagine the terror felt by my family from the comfort of my home in Dubai — four hours behind and thousands of miles away from the Philippines. I moved to the UAE three years ago, but this was the first time I felt very far away from my family. “We are okay, don’t worry about us too much. We will make it through the night,” my mother assured me, as she always does.

Yet I struggled with anxiety all through the night, especially when my family members informed me that there was a power outage and that they were being evacuated. When communications went dead, I had no way of knowing what was going on at the other end. It is in moments like these that the distance between the two countries hits home, reminding me that my relatively comfortable life in the Gulf insulates me from the physical discomfort that natural disasters cause to my loved ones from time to time. — One Carlo Diaz

The country is particularly vulnerable to natural disasters on account of its location along the seismically active Pacific Ring of Fire, where about 90 percent of the world’s earthquakes occur.

At the same time, the country is buffeted by an average of 20 typhoons every year — a trend expected by climate scientists to accelerate with the effects of climate change.

President Rodrigo Duterte has responded to the disasters by renewing calls on wealthy nations to take action on the climate crisis affecting the developing world.

“The problem, whether we accept it or not, is climate change,” he said while surveying the flood damage recently.

“Developed countries must lead in deep and drastic cuts in carbon emissions. They must act now, or it would be too late. Or if I may say, it is too late.”

In 2013, Typhoon Haiyan (or Yolanda as it was known locally) killed at least 6,300 people in the Philippines alone and remains among the most powerful tropical cyclone on record.

However, every time a major natural disaster causes death and suffering, Filipinos can count on waves of generosity, especially from members of a diaspora that is always eager to express solidarity with people back home.

This instinct is not unique to overseas Filipino, to be sure. Many expatriate communities maintain close familial, emotional and financial ties with their home countries, some of which are prone to political and social unrest, conflicts and natural disasters.

Many Lebanese, for instance, have rallied behind their compatriots since the massive Beirut port blast of Aug. 4. There has been an outpouring of donations, gifts and remittances from the Lebanese diaspora in response to the overlapping crises back home.

“Filipinos have shown to be very sensitive to the demand for help when their country has been struck by similar disasters in the past,” said Roberto d’Ambrosio, a financial expert and CEO of brokerage firm Axiory Global.

“Remittances can play a vital role in the immediate aftermath of a disaster, especially for lower-income families whose income sources vanish abruptly under the circumstances, without any buffer to face an emergency or navigate short-term difficulties.”

This is especially true for the Philippines, which relies heavily on money sent by Filipinos working abroad to keep its foreign-currency reserves replenished.

“In general terms, remittances during crises constitute a very important form of help for the affected country, allowing the economy to keep ticking thanks to the inflow of funds from abroad,” d’Ambrosio said.

According to a report published in August by the Asian Development Bank (ADB), remittances across the world could decline by $108.6 billion this year owing to job losses and trimmed payrolls in the wake of the COVID-19 pandemic.

Money sent to Asia, where about a third of migrant workers worldwide come from, could plunge by $54.3 billion, the Manila-based lender said in its report.

According to the ADB, remittances to Asia and the Pacific, which amounted to $315 billion in 2019, help fuel the consumption-led growth for some of the region’s developing economies, including the Philippines.

“I would do anything to have my presence felt back home, one way or another,” said de Guzman, from Marikina, “through the money I transfer or by constantly checking up on my family.”