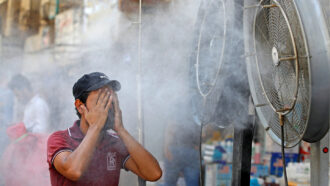 More than 2,000 people dead from extreme heat and wildfires raging in Portugal and Spain. High temperature records shattered from England to Japan. Overnights that fail to cool.

Brutal heat waves are quickly becoming the hallmark of the summer of 2022.

And even as climate change continues to crank up the temperature, scientists are working fast to understand the limits of humans’ resilience to heat extremes. Recent research suggests that heat stress tolerance in people may be lower than previously thought. If true, millions more people could be at risk of succumbing to dangerous temperatures sooner than expected.

“Bodies are capable of acclimating over a period of time” to temperature changes, says Vivek Shandas, an environmental planning and climate adaptation researcher at Portland State University in Oregon. Over geologic time, there have been many climate shifts that humans have weathered, Shandas says. “[But] we’re in a time when these shifts are happening much more quickly.”

Extreme heat alerts blared across Europe beginning in June and continuing through July, the rising temperatures exacerbating drought and sparking wildfires. The United Kingdom shattered its hottest-ever record July 19 when temperatures reached 40.3° C in the English village of Coningsby. The heat fueled fires in France, forcing thousands to evacuate from their homes.

And the litany goes on: June brought Japan its worst heat wave since record-keeping began in 1875, leading to the country’s highest-ever recorded temperature of 40.2° C.  China’s coastal megacities, from Shanghai to Chengdu, were hammered by heat waves in July as temperatures in the region also rose above 40° C. And in the United States, a series of heat waves gripped the Midwest, the South and the West in June and July. Temperatures soared to 42° C in North Platte, Neb., and to 45.6° C in Phoenix.

The current global rate of warming on Earth is unprecedented (SN: 7/24/19). And scientists have long predicted that human-caused climate change will increase the occurrence of heat waves. Globally, humans’ exposure to extreme heat tripled from 1983 to 2016, particularly in South Asia.

The heat already is taking an increasing toll on human health. It can cause heat cramps, heat exhaustion and heat stroke, which is often fatal. Dehydration can lead to kidney and heart disease. Extreme heat can even change how we behave, increasing aggression and decreasing our ability to focus (SN: 8/18/21).

Surface air temperature in the Eastern Hemisphere on July 13, 2022

The human body has various ways to shed excess heat and keep the core of the body at an optimal temperature of about 37° C (98.6° F). The heart pumps faster, speeding up blood flow that carries heat to the skin (SN: 4/3/18). Air passing over the skin can wick away some of that heat. Evaporative cooling — sweating — also helps.

When water evaporates from the skin or another surface, it steals away energy in the form of heat, briefly cooling that surface. That means that in drier regions, the wet bulb temperature — where that ephemeral cooling effect happens readily — will be lower than the actual air temperature. In humid regions, however, wet and dry bulb temperatures are similar, because the air is so moist it’s difficult for sweat to evaporate quickly.

So when thinking about heat stress on the body, scientists use wet bulb temperatures because they are a measure of how much cooling through evaporation is possible in a given climate, says Daniel Vecellio, a climate scientist at Penn State.

“Both hot/dry and warm/humid environments can be equally dangerous,” Vecellio says — and this is where the body’s different cooling strategies come into play. In hot, dry areas, where the outside temperature may be much hotter than skin temperature, human bodies rely entirely on sweating to cool down, he says. In warm, humid areas, where the air temperature may actually be cooler than skin temperatures (but the humidity makes it seem warmer than it is), the body can’t sweat as efficiently. Instead, the cooler air passing over the skin can draw away the heat.

How hot is too hot?

Given the complexity of the body’s cooling system, and the diversity of human bodies, there isn’t really a one-size-fits-all threshold temperature for heat stress for everybody. “No one’s body runs at 100 percent efficiency,” Vecellio says. Different body sizes, the ability to sweat, age and acclimation to a regional climate all have a role.

Still, for the last decade, that theoretical wet bulb 35° C number has been considered to be the point beyond which humans can no longer regulate their bodies’ temperatures. But recent laboratory-based research by Vecellio and his colleagues suggests that a general, real-world threshold for human heat stress is much lower, even for young and healthy adults.

The researchers tracked heat stress in two dozen subjects ranging in age from 18 to 34, under a variety of controlled climates. In the series of experiments, the team varied humidity and temperature conditions within an environmental chamber, sometimes holding temperature constant while varying the humidity, and sometimes vice versa.

The subjects exerted themselves within the chamber just enough to simulate minimal outdoor activity, walking on a treadmill or pedaling slowly on a bike with no resistance. During these experiments, which lasted for 1.5 to two hours, the researchers measured the subjects’ skin temperatures using wireless probes and assessed their core temperatures using a small telemetry pill that the subjects swallowed.

These results suggest that there is much more work to be done to understand what humans can endure under real-world heat and humidity conditions, but that the threshold may be much lower than thought, Vecellio says. The 2010 study’s theoretical finding of 35° C may still be “the upper limit,” he adds. “We’re showing the floor.”

And that’s for young, healthy adults doing minimal activity. Thresholds for heat stress are expected to be lower for outdoor workers required to exert themselves, or for the elderly or children. Assessing laboratory limits for more at-risk people is the subject of ongoing work for Vecellio and his colleagues.

A worker wipes away sweat in Toulouse, France, on July 13. An intense heat wave swept across Europe in mid-July, engulfing Spain, Portugal, France, England and other countries.VALENTINE CHAPUIS/AFP via Getty Images

If the human body’s tolerance for heat stress is generally lower than scientists have realized, that could mean millions more people will be at risk from the deadliest heat sooner than scientists have realized. As of 2020, there were few reports of wet bulb temperatures around the world reaching 35° C, but climate simulations project that limit could be regularly exceeded in parts of South Asia and the Middle East by the middle of the century.

How best to inform the public about heat risk is “the part that I find to be tricky,” says Shandas, who wasn’t involved in Vecellio’s research. Shandas developed the scientific protocol for the National Integrated Heat Health Information System’s Urban Heat Island mapping campaign in the United States.

It’s very useful to have this physiological data from a controlled, precise study, Shandas says, because it allows us to better understand the science behind humans’ heat stress tolerance. But physiological and environmental variability still make it difficult to know how best to apply these findings to public health messaging, such as extreme heat warnings, he says. “There are so many microconsiderations that show up when we’re talking about a body’s ability to manage [its] internal temperature.”

One of those considerations is the ability of the body to quickly acclimate to a temperature extreme. Regions that aren’t used to extreme heat may experience greater mortality, even at lower temperatures, simply because people there aren’t used to the heat. The 2021 heat wave in the Pacific Northwest wasn’t just extremely hot — it was extremely hot for that part of the world at that time of year, which makes it more difficult for the body to adapt, Shandas says (SN: 6/29/21).

Heat that arrives unusually early and right on the heels of a cool period can also be more deadly, says Larry Kalkstein, a climatologist at the University of Miami and the chief heat science advisor for the Washington, D.C.–based nonprofit Adrienne Arsht-Rockefeller Foundation Resilience Center. “Often early season heat waves in May and June are more dangerous than those in August and September.”

In the 1960s, the average time between the earliest and latest heat waves that might occur in a year was just about 22 days. By the 2010s, the average heat wave season had lengthened to almost 70 days.

One way to improve communities’ resilience to the heat may be to treat heat waves like other natural disasters — including give them names and severity rankings (SN: 8/14/20). As developed by an international coalition known as the Extreme Heat Resilience Alliance, those rankings form the basis for a new type of heat wave warning that explicitly considers the factors that impact heat stress, such as wet bulb temperature and acclimation, rather than just temperature extremes.

The rankings also consider factors such as cloud cover, wind and how hot the temperatures are overnight. “If it’s relatively cool overnight, there’s not as much negative health outcome,” says Kalkstein, who created the system. But overnight temperatures aren’t getting as low as they used to in many places. In the United States, for example, the average minimum temperatures at nighttime are now about 0.8° C warmer than they were during the first half of the 20th century, according to the country’s Fourth National Climate Assessment, released in 2018 (SN: 11/28/18).

By naming heat waves like hurricanes, officials hope to increase citizens’ awareness of the dangers of extreme heat. Heat wave rankings could also help cities tailor their interventions to the severity of the event. Six cities are currently testing the system’s effectiveness: four in the United States and in Athens, Greece, and Seville, Spain. On July 24, with temperatures heading toward 42° C, Seville became the first city in the world to officially name a heat wave, sounding the alarm for Heat Wave Zoe.

As 2022 continues to smash temperature records around the globe, such warnings may come not a moment too soon.

4 hours ago
Nearly half of world’s terror victims are African, with organised crime increasingly entrenched