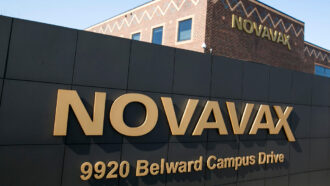 A COVID-19 vaccine made by Novavax is about 89 percent effective against illness, but doesn’t protect as well against a virus variant that arose in South Africa. The data also suggest that people who previously had coronavirus infections may not be immune to the South Africa variant, known as 501Y.V2 or B.1.351, which is now circulating in at least 30 countries.

The results came the same day that health officials reported the first two U.S. cases of COVID-19 caused by the South Africa variant. It turned up in two people in separate parts of South Carolina with no connection to each other. Neither had traveled recently, so it’s unclear where they picked up the virus.

Novavax Inc., based in Gaithersburg, Md., presented the interim data from clinical trials in South Africa and the United Kingdom in a news release January 28. The studies are not yet complete and final effectiveness data are expected in February. The company is also conducting a large trial in the United States and Mexico for which data are not yet available.

Novavax’s vaccine, given in two shots 21 days apart, contains a rod-shaped nanoparticle studded with the coronavirus’s spike protein. It is the first protein-based COVID-19 vaccine for which there are effectiveness results. That signature protein prompts the body to recognize and make antibodies against the virus, setting up the tools to fight a later infection.

In the United Kingdom, the company did a Phase III clinical trial to test the vaccine’s efficacy against a placebo in more than 15,000 people. Of the 62 cases of COVID-19 that arose among study participants, 56 were in the placebo group and six in the vaccine group. Most cases were mild or moderate. One severe case occurred in the placebo group.

Those data indicate that the vaccine protects against severe illness with 89.3 percent effectiveness. The vaccine protected nearly as well — with 85.6 percent effectiveness — against illness from a more transmissible variant of the virus known as B.1.1.7 that has become prominent in the United Kingdom (SN: 12/22/20). In the United States, that strain has also been detected in more than half of the states and may become the dominant strain by March (SN: 1/15/21).

The South African trial included about 4,400 adults. As the trial got started, a variant of the coronavirus called 501Y.V2 became the predominant variant in the country. That variant is of concern because some evidence suggests it can escape antibodies that prevent the virus from entering cells (SN: 1/27/20).

In the preliminary analysis of the South African trial, 44 participants got COVID-19. Of those, 29 — including the sole severe case — were in the placebo group and 15 were in the vaccine group.  The vaccine showed 60 percent efficacy at preventing severe COVID-19 in people who are HIV-negative. When HIV-positive people were added to equation, the vaccine was 49.4 percent effective at preventing disease.

Researchers have determined the genetic makeup of the virus in 27 of the 44 cases in the study. The 501Y.V2 variant accounted for 25 of those 27 cases, or 92.6 percent.

About a third of the participants had antibodies in their blood at the start of the study indicating that they’d had previous infections with SARS-CoV-2, the virus that causes COVID-19. But those previous infections didn’t protect against the new variant.

“The wave one illness experience is not providing immunity to wave two,” Gregory Glenn, president of research and development for Novavax said January 28 during a conference call with investors.

Still, the company is encouraged that the vaccine showed some protection against the variant, Glenn said. Other companies are testing whether their vaccines can also head off illness caused by the new variant.

Novavax already has new versions of its vaccine, including one that includes the 501Y.V2 variant, in development and expects to start clinical trials in the second quarter of 2021, Glenn said.