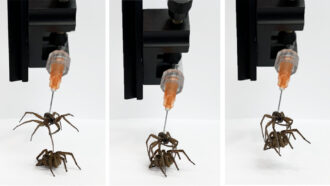 Scientists have literally reanimated dead spiders to do their bidding.

In a new field dubbed “necrobotics,” researchers converted the corpses of wolf spiders into grippers that can manipulate objects. All the team had to do was stab a syringe into a dead spider’s back and superglue it in place. Pushing fluid in and out of the cadaver made its legs clench open and shut, the researchers report July 25 in Advanced Science.

The idea was born from a simple question, explains Faye Yap, a mechanical engineer at Rice University in Houston. Why do spiders curl up when they die?

The answer: Spiders are hydraulic machines (SN: 4/25/22). They control how much their legs extend by forcing blood into them. A dead spider no longer has that blood pressure, so its legs curl up.

“We were just thinking that was so cool,” Yap says. “We wanted to leverage it.”

Her team first tried putting dead wolf spiders in a double boiler, hoping that the wet heat would make the spiders expand and push their legs outward. That didn’t work. But when the researchers injected fluid straight into a spider corpse, they found that they could control its grip well enough to pull wires from a circuit board and pick up other dead spiders. Only after hundreds of uses did the necrobots start to become dehydrated and show signs of wear.

See how this “necrobot” gripper, made from a dead wolf spider, picks up another dead spider. The attached syringe pushes fluid in and out of the spider it’s glued to, making the corpse’s legs snap open and shut.T.F. Yap and coauthors

In the future, the researchers will coat spiders with a sealant to hold off that decline. But the next big step is to control the spiders’ legs individually, Yap says, and in the process, figure out more about how spiders work. Then her team could translate their understanding into better designs for other robots.

“That would be very, very interesting,” says Rashid Bashir, a bioengineer at the University of Illinois Urbana-Champaign who wasn’t involved in the new study. A spider corpse itself would probably have problems as a robot, he says, because it won’t perform consistently like “hard robots” and its body will break down over time. But spiders can definitely offer lessons to engineers (SN: 4/2/19). “There’s a lot to be learned from biology and nature,” Bashir says.

Despite the whole reanimating dead spiders thing, Yap is no mad scientist. She wonders whether it’s okay to play Frankenstein, even with spiders. “No one really talks about the ethics” when it comes to this sort of research, she says.

Scientists need to figure out the morality of this sort of bioengineering before they get too good at it, Bashir agrees. The question is, he says, “how far do you go?”