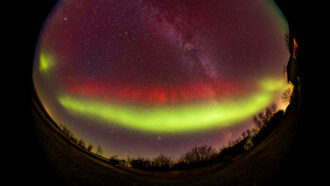 What happens when two different kinds of auroras get together? One spills the other’s secrets.

Amateur astronomers have captured a strange combination of red and green auroras on camera, and physicists — who had never seen such a thing before — have now used these images to learn what may trigger the more mysterious part of the lightshow.

Photographer Alan Dyer was in his backyard in Strathmore, Canada, when he saw the lights dancing overhead and started filming. “I knew I had something interesting,” says Dyer, who also writes about astronomy. What he didn’t know was that he had just made the most complete recording of this rare phenomenon.

At a glance, Dyer’s video looks like a celestial watermelon. The rind, a rippling green aurora, is well understood: It appears when the solar wind energizes protons trapped within Earth’s magnetic field, which then rain down and knock electrons and atoms around (SN: 12/10/03).

The swath of fruity magenta is more mysterious: Though scientists have known about these “stable auroral red arcs” for decades, there’s no widely accepted proof of how they form. One popular theory is that part of Earth’s magnetic field can heat up the atmosphere and, like proton rain, jostle particles.

But until now, researchers had never seen both of these red and green auroras side by side, says Toshi Nishimura, a space physicist at Boston University. “This strange combination,” he says, “was something beyond our expectations.”

Alan Dyer’s footage of this rare double aurora, a time lapse captured over 33 minutes on October 12, 2021, is helping physicists tease out clues to what causes the red glow.

Along with satellite observations, Dyer’s images and similar ones captured by other amateur astronomers in Canada and Finland show that the two phenomena are related, Nishimura’s team reports in the July JGR Space Physics. Thin rays in the red aurora are the smoking gun as to how. Those lines trace the paths of electrons as they fall along the Earth’s magnetic field. So just as proton rain triggers the green aurora, electron rain appears to trigger the red one, with the solar wind powering both at the same time. Since the electrons carry less energy than the protons, they make for a more reddish color.

But electron rain might not be the only way to produce these red glows, cautions Brian Harding, a space physicist at the University of California, Berkeley. Either way, he says, the results are exciting because they show what’s going on is more complicated than researchers thought.

Those complications are important to understand. The auroras Dyer saw, though beautiful, are danger zones for radio communication and GPS systems (SN: 8/13/17). As Nishimura puts it: If you were driving under a subauroral red arc, your GPS might tell you to veer into a field.

Until scientists better understand these red glows, they won’t be able to forecast space weather like they do normal weather, Harding explains. “You want to make sure that you can predict stuff like this,” he says.

The new results would not have been possible without the citizen scientists who took the photos, Nishimura says. “This is a new way of doing research…. When they take more and more cool images, they find more and more things that we don’t know about.”

According to Dyer, more photos are exactly what’s coming. “We can make a unique contribution to science,” he says.  After all, “you never know what’s going to appear.”

2 hours ago
Nearly half of world’s terror victims are African, with organised crime increasingly entrenched