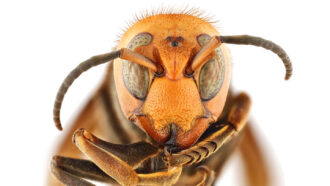 That’s what the Entomological Society of America, or ESA, announced July 25 as the preferred plain-English common name for the big, orange-and-black Vespa mandarinia. The choice has at least as much to do with people as it does with hornets.

It’s a celebrity as insects go. By 2019, the species had hitchhiked across the Pacific and was already nesting in Canada probably also on the U.S. side of the border. News stories exclaimed over hornet queens as long as a human thumb and the hornets’ late summer raiding parties that mass-slaughter whole hives of adult honeybees to steal the chubby larvae as wasp food. V. mandarinia became the doomsday spirit insect for the start of COVID-19 times (SN: 5/29/20). As of late July, there have been no confirmed sightings this year of the hornet in Washington, the state at the center of the buzz in the United States, but trapping efforts are under way.

In that innocent earlier time, the ESA’s list of preferred common names didn’t have an entry for the species. “Murder hornet” was way too tabloid; the hornets don’t hunt people. Frontline scientists dealing with invaders in the Pacific Northwest took up the name “Asian giant hornet.”

Yet both “Asian” and “giant” troubled Chris Looney of the Washington State Department of Agriculture in Olympia. “Asian” is “at best neutral and uninformative,” he wrote when proposing an alternative name to ESA. All 22 species of Vespa hornets have some part of their range in Asia. So mentioning the continent does pretty much nothing to clarify which species is under discussion.

At worst, though, connecting Asia and a nervous-making insect feeds racist fears, Looney argued. He warned about a recent “rise in hate crimes and other odious behavior directed at people of Asian descent in countries across the globe.” He has heard multiple grumblings about the hornet as “another” unwelcome “thing from China,” he said. (The current invaders came from elsewhere in Asia.)

With such concerns in mind, ESA has launched the Better Common Names Project to fight racism embedded in names (SN: 8/25/21). In 2021, this effort led to retirement of a cringy old name for what’s now the spongy moth (SN: 3/10/22). Looney urged that a hornet common name avoid linking “Asian”with “a large insect that inspires fear and is under eradication.”

The trouble with just calling it “giant” is that other hornets also grow whoppingly big. One, Vespa soror, a mostly subtropical species, turned up as a large, one-hornet surprise in Vancouver in 2019. Those hornets grow about the same size as V. mandarinia and also will mass-slaughter honeybees.

The new name declaration finesses both size and geography. Based on rough distribution in their native Asian range, V. mandarinia is now the “northern giant hornet” and V. soror the “southern giant hornet.”

Comparing the native ranges of two huge hornet species shows why the Entomological Society of America picked “northern giant hornet” as the common name for Vespa mandarinia, which had invaded British Columbia and Washington state by 2019. Yellow dots mark reports of that species across a more northerly range of Asia (darker yellow denotes more abundant reports) than the span of red-orange stars for the also newly named “southern giant hornet” (V. soror).

This decision is official in the sense of selection by a relevant institution, but ESA can only enforce name use in its own publications. Other groups may decide to follow ESA rules, but there’s no central authority in the free-for-all fizz of common names. A field guide writer can choose among folk traditions and languages or even just make up names.

“I ignore common names anyway,” says James Carpenter, a hornet specialist at the American Museum of Natural History in New York City. “It is an amusing conceit to think that they can be regulated.”

What matters to scientists are the Latin names, and ESA’s rethink does nothing about the northern giant’s formal scientific name, V. mandarinia. It dates from 1852 and “indeed, it is a reference to Asia,” says evolutionary biologist and entomologist Jessica Ware, also at the American Museum of Natural History. She is president of ESA and a strong advocate for better common names. The scientific names, however, follow intricate rules overseen by an international governing body. Making changes “will be challenging to do, should people decide to do it,” she says.