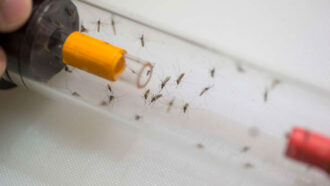 Turns out there is rest for the wicked: Sleepy mosquitoes are more likely to catch up on missed z’s than drink blood, a new study finds.

Most people are familiar with the aftermath of a poor night’s sleep. Insects also suffer; for instance, drowsy honeybees struggle to perform their signature waggle dance, and weary fruit flies show signs of memory loss. In the case of sleep-deprived mosquitoes, they give up valuable time for feeding in favor of sleeping overtime, researchers report June 1 in Journal of Experimental Biology.

The preference for dozing over dining is surprising given that “we know that mosquitoes love blood a lot,” says Oluwaseun Ajayi, a disease ecologist at the University of Cincinnati.

Scientists have long been interested in mosquitoes’ circadian rhythms, the internal clock that determines their sleep and awake times (SN: 10/2/17). Knowing when a mosquito is awake — and biting — is important for understanding and limiting disease transmission. For instance, malaria, often transmitted by nocturnal mosquitoes, is kept under control by slinging netting around beds. But new research suggests that mosquitoes that feed during the day may also spread the disease.

It’s challenging to study sleeping bloodsuckers in the lab. That’s partly because awake mosquitoes are aroused by the presence of a meal — the experimenter. And when mosquitoes do fall asleep, they look rather similar to peers that are merely resting to conserve energy.

That’s the tricky — and often species-specific — question: “How can you tell [when] an insect is sleeping?” says Samuel Rund, a mosquito circadian biologist at the University of Notre Dame in Indiana who was not involved in the research.

One way to tell is by tracking the insect’s behavior. So Ajayi and colleagues watched mosquitoes sleep. The team focused on three species known to carry diseases, including malaria: Aedes aegypti, which are active during the day; Culex pipiens, which prefer dusk; and the nocturnal Anopheles stephensi. The mosquitoes were left alone in a room in small enclosures, where the team used cameras and infrared sensors to spy on them.

After about two hours, the mosquitoes appeared to nod off. Their abdomens lowered to the ground and their hind legs drooped, the footage showed. As time went on, C. pipiens and A. aegypti showed a reduced response when the experimenter walked in the room, suggesting a tasty smell was less likely to wake those species when in a deep sleep. Taken together, the change in posture, periods of inactivity and lower arousal were determined to identify a snoozing mosquito.

What started as a relaxing experiment for the mosquitoes quickly changed gears. The insects were placed in clear tubes that received vibration pulses every few minutes, preventing them from falling into deep sleep. After four to 12 hours of this sleep deprivation, the team mimicked the presence of a host with a pad of heated artificial sweat. In another experiment, a plucky human volunteer offered up a leg to be fed on for five minutes by sleep-deprived and well-rested A. aegypti in batches of 10 insects.