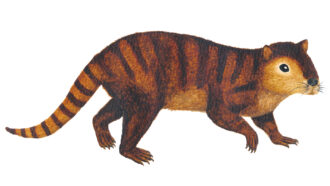 The Rise and Reign of the Mammals
Steve Brusatte
Mariner Books, $29.99

In my opinion, the most satisfying science documentary TV series ever made was a 1970s British production called Connections. Hosted by impish historian James Burke, wearing bell-bottoms and thick-framed tortoiseshell glasses, each episode revealed how one small innovation from earlier human civilizations led to another and then another and another, culminating in the invention of some ultramodern (for the 1970s) technology.

Watching these pieces of the past come together was deeply gratifying, if not a little dizzying. The present is so familiar that it feels inevitable. But it was striking to see modern civilization, even modern humans, in context, to recognize how all that we are now actually hinges on countless moments of invention, improvement and experimentation in the deep past.

I had a similar reaction to The Rise and Reign of the Mammals, paleontologist Steve Brusatte’s sweeping history of the animals that have, for the moment, inherited the Earth. Moving generally forward in time, the book describes how the mammalian line progressively acquired a range of features that have come to define what a mammal is.

Some of the moments of evolutionary invention that led to what we now think of as a mammal are remarkably subtle. There’s the hard roof of the mouth that created a dedicated airway to the lungs, allowing mammal ancestors to eat and breathe at the same time. There’s the change from a spine that bends from left to right (which produces the classically reptilian side-to-side gait) to one that enables bending up and down, which ultimately allowed mammals to take in more oxygen as they moved, helping them run faster. And there’s the variety of tooth shapes — incisors, canines, premolars and molars — that made it possible for mammals to eat many kinds of food. A reptile, by contrast, tends to have just one tooth type.

Some mammalian characteristics are very familiar: milk production, warm-bloodedness, hair. But there’s one less–well-known evolutionary advance that was in its humble way quite profound, setting “us apart from amphibians, reptiles, and birds,” Brusatte writes. It’s a joint in the jaw that makes chewing possible (SN: 8/17/19, p. 8). The ability to chew was “a major evolutionary turning point,” he writes. “It triggered a domino chain of changes to mammalian feeding, intelligence, and reproduction.”

Brusatte also describes a second small, curious adaptation: the transformation of two bones in the reptile jaw, which migrated to the inner ear to become two members of a famous trio, the hammer and anvil (the third is the stirrup). These inner ear bones are the basis for yet another key mammalian feature: the ability to hear a wide range of frequencies, particularly in the upper register (SN Online: 12/6/19).

Within just a few hundred thousand years of the asteroid impact that wiped out all nonbird dinos some 66 million years ago, mammals moved in to fill the vacancy, rapidly getting a lot bigger, ballooning from, say, mouse-sized to beaver-sized (SN: 12/7/19, p. 32). Pretty soon, they got a lot smarter too. In a geologic blink — a scant 10 million years — mammals’ brains caught up with their brawn, and then the Age of Mammals was off to the races (SN: 5/7/22 & 5/21/22, p. 18).

Paleontology narratives often require refocusing a story’s lens in a way that can be jarring, zooming out to encompass Earth-wide climate cataclysms and mass extinctions and then in again to describe tiny bones and obscure species. Brusatte, though, is a nimble storyteller and he’s chosen an engrossing story to tell.

As a science writer, I often find myself focusing on minute advances, studying tiny threads. So it’s satisfying to sit back and admire the full tapestry as presented in The Rise and Reign of the Mammals. Reading this book reminded me what I most enjoy about geology, paleontology and the evolution of life on Earth: This planet has got some epic stories.

Buy The Rise and Reign of the Mammals from Bookshop.org. Science News is a Bookshop.org affiliate and will earn a commission on purchases made from links in this article.