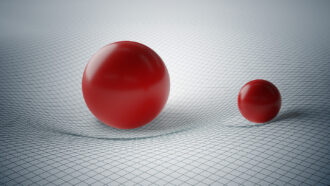 If you’re superstitious, a black cat in your path is bad luck, even if you keep your distance. Likewise, in quantum physics, particles can feel the influence of magnetic fields that they never come into direct contact with. Now scientists have shown that this eerie quantum effect holds not just for magnetic fields, but for gravity too — and it’s no superstition.

Usually, to feel the influence of a magnetic field, a particle would have to pass through it. But in 1959, physicists Yakir Aharonov and David Bohm predicted that, in a specific scenario, the conventional wisdom would fail. A magnetic field contained within a cylindrical region can affect particles — electrons, in their example — that never enter the cylinder. In this scenario, the electrons don’t have well-defined locations, but are in “superpositions,” quantum states described by the odds of a particle materializing in two different places. Each fractured particle simultaneously takes two different paths around the magnetic cylinder. Despite never touching the electrons, and hence exerting no force on them, the magnetic field shifts the pattern of where particles are found at the end of this journey, as various experiments have confirmed (SN: 3/1/86).

In the new experiment, the same uncanny physics is at play for gravitational fields, physicists report in the Jan. 14 Science. “Every time I look at this experiment, I’m like, ‘It’s amazing that nature is that way,’” says physicist Mark Kasevich of Stanford University.

Kasevich and colleagues launched rubidium atoms inside a 10-meter-tall vacuum chamber, hit them with lasers to put them in quantum superpositions tracing two different paths, and watched how the atoms fell. Notably, the particles weren’t in a gravitational field–free zone. Instead, the experiment was designed so that the researchers could filter out the effects of gravitational forces, laying bare the eerie Aharonov-Bohm influence.

The study not only reveals a famed physics effect in a new context, but also showcases the potential to study subtle effects in gravitational systems. For example, researchers aim to use this type of technique to better measure Newton’s gravitational constant, G, which reveals the strength of gravity, and is currently known less precisely than other fundamental constants of nature (SN: 8/29/18).

A phenomenon called interference is key to this experiment. In quantum physics, atoms and other particles behave like waves that can add and subtract, just as two swells merging in the ocean make a larger wave. At the end of the atoms’ flight, the scientists recombined the atoms’ two paths so their waves would interfere, then measured where the atoms arrived. The arrival locations are highly sensitive to tweaks that alter where the peaks and troughs of the waves land, known as phase shifts.

At the top of the vacuum chamber, the researchers placed a hunk of tungsten with a mass of 1.25 kilograms. To isolate the Aharonov-Bohm effect, the scientists performed the same experiment with and without this mass, and for two different sets of launched atoms, one which flew close to the mass, and the other lower. Each of those two sets of atoms were split into superpositions, with one path traveling closer to the mass than the other, separated by about 25 centimeters. Other sets of atoms, with superpositions split across smaller distances, rounded out the crew. Comparing how the various sets of atoms interfered, both with and without the tungsten mass, teased out a phase shift that was not due to the gravitational force. Instead, that tweak was from time dilation, a feature of Einstein’s theory of gravity, general relativity, which causes time to pass more slowly close to a massive object.

The two theories that underlie this experiment, general relativity and quantum mechanics, don’t work well together. Scientists don’t know how to combine them to describe reality. So, for physicists, says Guglielmo Tino of the University of Florence, who was not involved with the new study, “probing gravity with a quantum sensor, I think it’s really one of … the most important challenges at the moment.”