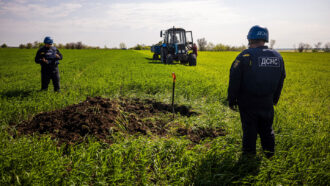 By now, wheat planted late last year waves in fields across Ukraine. Spring crops of sunflowers and barley are turning swaths of dark earth into a fuzz of bright green. But with Russia’s war being waged in some of the most fertile regions of Ukraine, uncertainty looms over summer harvesting.

Ukrainian farmers braved a war zone to carry out close to 80 percent of spring planting, covering roughly 14 million hectares. Still, Russia’s invasion has raised fears that not only are this year’s crop yields in jeopardy, but also that Ukraine’s agricultural output could be diminished for years. At the root of this worry, in part, is how warfare impacts soil.

Ukraine is home to some of the most fertile soil in the world, making it a top global producer of cereals, such as wheat and maize, as well as seed oils like sunflower oil. The country’s exports feed millions of people from Europe and Africa to China and Southeast Asia.

With the war in its fourth month, the Food and Agriculture Organization of the United Nations estimates at least 20 percent of Ukraine’s crops planted in winter will remain unharvested or went unplanted. And despite farmers’ best efforts, many spring crops went unplanted. This summer’s winter wheat harvest could be cut approximately in half (a loss of about 2 million hectares) and sunflower products cut by a third.

With warfare able to degrade and contaminate soil for years, crop yields — and the people who depend on them — could suffer long after a cease-fire.

A type of grassland soil called chernozem covers nearly two-thirds of agricultural lands in Ukraine. Meaning “black earth,” chernozem is a Ukrainian and Russian word that describes highly fertile soils distinguished by one to two meters of dark, rich organic matter. Over the last 10,000 years, it accumulated along the Eurasian steppes, slowly building up as a black bed atop fine, windblown sediments called loess, which coated the region as the glaciers retreated. At the same time in North America, grassland soils similar to chernozems called mollisols formed over the Great Plains, creating twin breadbaskets.

Chernozem (shown) is nutrient-rich dark soil that is essential for agriculture in Ukraine.Soil Museum/Soil Education Center/University of Agriculture in Kraków, courtesy of Piotr Pacanowski

Chernozems are rich in elements that plants need to grow, such as nitrogen, potassium and calcium. Those nutrients come from organic matter and underlying loess. Chernozems also hit the sweet spot of clay content — just enough to help hold the soil together and cling onto nutrients but not so much that roots have a hard time penetrating the ground.

In their natural state, chernozems come preloaded with vitamins and minerals, like a super-smoothie of plant nutrition. “Plants growing in these soils are lucky,” Berhe says. “They’re growing in an environment that has everything they need to grow, with or without additional fertilizers or extra supplements.”

There’s a term for what war does to soil: bombturbation. It’s grim wordplay on the natural process of bioturbation — earthworms and other animals stirring up soil. In this case, though, exploding bombs and artillery fire fling clods of dirt and dig craters. Joseph Hupy, a soil geomorphologist at Purdue University in West Lafayette, Ind., coined the term with coauthor Randall Schaetzl in 2006 while studying soils’ battlefield scars.

At France’s World War I battlefield at Verdun, Hupy dug meter-long trenches with a backhoe across bomb craters and in their vicinity, looking for signs of disturbance. He wanted to understand how the landscape recovered, with or without human help. He found decades-old chaos beneath the surface. His cross sections revealed rubble, chunks of limestone bedrock embedded in a slurry of sandy soil and organics. That chaos was reflected on the surface too: Where there were craters, water flow had changed, leading to different patterns of vegetation growth, Hupy and a colleague reported in 2012 in Geomorphology. Because of shifts in hydrology and a lack of human management, the landscape reverted from agriculture to forest. “It’s a completely new ecosystem,” he says.

Shelling left a deep crater in a field on the outskirts of Kharkiv, Ukraine. This type of damage can change vegetation growth.Bernat Armangue/AP Photo

Hupy noted similar changes at Vietnam’s Khe Sanh, which the United States heavily bombed in 1968. Aerial images of Ukrainian battle zones show pockmarked fields, reminiscent of the sites Hupy studied in Vietnam. Problems in Ukrainian soil may not be limited to the surface. Even if farmers smooth over the top of the soil, underground rubble can act like a barrier or sluice for water, which could make it harder to grow crops.

When there’s a highly compacted area beneath where the teeth of a plow can go, that impermeable layer of soil “can create standing water, and all other sorts of problems from an agricultural standpoint,” Hupy says.

Bombs may leave some of the most obvious impacts, but they aren’t the only thing that can physically disturb soil. Soggy, thawing soils in Ukraine bogged down Russian tanks as if a metaphor of resistance: The land itself was fighting back. But what’s bad for invading tanks is also bad for the soil. When tanks roll over a field, their weight makes soil clump and stick together. Wet soil can compound the problem, exacerbating compaction. And chernozems are particularly vulnerable to compaction: With their thick layer of organic matter, they’re fluffy and light.

Compaction can temporarily cut crop yields by anywhere from 10 percent to nearly 60 percent because it makes it more difficult for roots to reach nutrients and prevents water and fertilizers from penetrating the soil. A study in International Agrophysics on compaction and crop yields in Eastern European chernozems, for instance, found chernozem-grown barley plants yielded about half the amount of crops when highly compacted. Earlier work suggested compaction could impact yields for up to five years if it reached deep enough into the chernozem. For all but the worst compaction, though, several seasons of typical planting will help heal the land, says soil scientist DeAnn Presley of Kansas State University in Manhattan.

“If you had tank traffic go right through a crop field, the farmer is probably going to go out and just till up the field pretty well after the conflict is over. And you may never see that [compaction] again,” Presley says. Compaction “will definitely look terrible and you’ll have yield losses, but I don’t think they’ll be forever or permanent.”

Outside Kharkiv, a destroyed Russian tank sits in a field. Tanks can pack down the fluffy chernozem soil and that compaction can cut crop yields.DIMITAR DILKOFF/AFP via Getty Images

A study of military vehicles rolling over prairie soils outside Fort Riley, Kan., revealed it took as little as one year for dry soil to recover from being compacted, but up to four years for wet soil to recover, both without tilling, scientists reported in Soil Science Society of America Journal. Tank traffic can alter the community of soil microbes and reduce the abundance of other organisms, like soil-aerating earthworms, for several years as well, members of the same team reported in Applied Soil Ecology.

Chernozems’ fluffiness might put it at greater risk of compaction, but it can also help the soil spring back afterward, helping prevent it from becoming a longer-term problem. Hardy, deep-rooting plants like some of Ukraine’s native grasses could also loosen stubborn soils, Presley says, but it would take years.

Countering compaction can be a relatively quick fix; not so with chemical contamination. Fuel spills, spent ammunition, chemical weapons, and animal and human remains can all foul the soil, sometimes for decades or longer.

Potentially toxic metals such as lead, arsenic and mercury can leach out of ammunition and weaponry and into the soil. Pollutants from warfare are still found in soils contaminated by wars as old as World War I, researchers reported in 2020 in Sustainability. At Ypres, a World War I battlefield in Belgium, scientists estimate that shells and artillery left more than 2,800 metric tons of copper in the top half-meter of soil. In Iran, soils remain laced with mercury and chlorine from the 1980s.

As crops grow, they can draw up these potentially toxic elements. Other elements, such as zinc and nickel, can severely stunt crop growth, says Ganga Hettiarachchi, a soil chemist also at Kansas State University. But soil contamination can be a hidden danger. If it doesn’t damage the plants, there may be no way of knowing if the soil is contaminated without careful testing, she says.

In some ways, chernozems are well-equipped to stop contaminants in their tracks in a matter of months. The soil’s organic matter and clay can trap toxic elements before they can enter a plant, sucking out contaminants – even in a matter of days in optimal lab conditions, Hettiarachchi says. But in real life, many chernozems are also slightly acidic, which can let those elements stay in a form that plants can take up for months before being stopped.

Because of this uncertainty, every potentially contaminated patch of soil must be checked to see if crops can be safely grown. “We have to monitor the soil and the crops as well, at least until we understand what’s going on,” says Hettiarachchi.

Potentially toxic metals can leach out of munitions, such as this rocket a team is working to remove from a field in Borodianka, Ukraine. Ridding the country of this weaponry could take decades.Christopher Furlong/Getty Images

For some elements, farmers could remediate by planting plants known to extract those elements over time, says Hettiarachchi, but that would require several years of planting. Other options include altering the soils’ pH to lock away metals or adding extra fertilizer, which can also immobilize potentially toxic elements. But even after remediation occurs, farmers must test to see if soil conditions are keeping the contaminants locked away, or if the war is coming back to haunt them from the ground.

Depending on the extent of contamination, “it might not be possible for Ukrainian farmers to avoid growing in contaminated soils,” she says. Soil testing and time will tell.

Looking toward the future

With Russia’s bombardment of Ukraine still ongoing, the effect on the country’s soil is still uncertain. There are some hints, though. This isn’t the first time the Donbas region — a disputed area in eastern Ukraine — has come under fire. Russian-backed separatists attacked it beginning in 2014 too.

Scientists working in the Donbas to improve soil health there have faced a litany of challenges: The region’s agriculture already suffered from degradation due to irrigation waters polluted by coal mines, researchers reported in 2020 in Mineralogical Journal. Decades of intense farming had also taken a toll. Since 2014, conflict has exacerbated those problems, creating new issues and hampering scientists’ ability to help.

The region’s “chernozems have suffered and are experiencing irreparable military degradation,” Ukrainian soil scientists and a lawyer wrote in 2021 in Scientific Papers. Series A. Agronomy. “It is easy to predict [the degradation of chernozems], but very difficult to overcome.”

Even as the fighting has been concentrated in eastern Ukraine, this assessment now may apply to a far broader swath of the country. “Our unique soils, chernozems, are in unprecedented conditions,” representatives from Ukraine’s Institute for Soil Science and Agrochemistry Research wrote Science News in an e-mail. “The extent of the damage has yet to be ascertained. In fact, we have just begun to work in this direction … in difficult military conditions.”