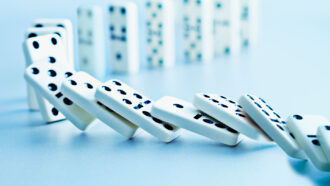 It may seem like fun and games, but understanding how dominoes topple isn’t child’s play.

“It’s a problem that is so natural; everybody plays with dominoes,” says David Cantor, a researcher at Polytechnique Montreal with a background in civil engineering. So Cantor set out to create computer simulations of a row of dominoes collapsing in a chain reaction.

Domino games are more fun with a buddy — and so is research on the rectangular blocks. Cantor teamed up with a friend, physicist Kajetan Wojtacki of the Institute of Fundamental Technological Research of the Polish Academy of Sciences in Warsaw.

Friction is crucial for determining the speed at which the collapse cascades through a row of dominoes, the pair report in the June Physical Review Applied. That includes both the friction between colliding dominoes, and between the dominoes and the surface they sit on.

The computer simulations revealed the conditions needed for a speedy collapse. Toppling cascaded quickest for closely spaced dominoes that had little friction between them and that stood on a high-friction surface (SN: 8/1/19).

Less friction between dominoes — as occurs for tiles with more slippery surfaces — means less energy is lost. And more friction between the dominoes and the surface they stand on, such as rough felt, means that the tiles don’t slide too far backward as they fall. Such backsliding would otherwise slow the cascade.

In some simulations, the chain reaction stopped short. For instance, dominoes spaced far apart on a slippery surface backslid so much they avoided hitting each other.

Based on the simulations, the two domino dynamos came up with an equation that predicts the speed of collapse and showed that the predictions matched results of previous experiments. Turns out, there’s serious science behind the satisfying spectacle.