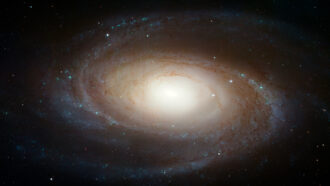 PASADENA, Calif. — The faint dwarf galaxies in a nearby galaxy group seem to have missed the memo. Instead of being dispersed evenly around the group’s most massive galaxy, which is what happens in our own galaxy group, these newly found dwarfs cluster in one region. And astronomers don’t know why.

Bell, of the University of Michigan in Ann Arbor, and colleagues used the Subaru telescope in Hawaii to hunt for faint clumps of stars, indicating dwarf galaxies, around the galaxy M81. This Milky Way–like galaxy is the most prominent member in a relatively nearby group of galaxies, all about 12 million light-years from Earth. The team found one definite dwarf galaxy and six possible fainter ones.

Most of the known satellite galaxies (circled in red) in the M81 galaxy group, along with seven newfound candidates (yellow), seem to cluster toward one side of the galaxy M81 (center).Sloan Digital Sky Survey

“The part that’s just bananas,” Bell said, is that the newfound satellite galaxies all sit on one side of M81.

Computer simulations of galaxy evolution suggest that the largest galaxies have many faint, small galaxies sprinkled uniformly throughout the outer part of the dominant galaxy’s diffuse cloudlike halo. Observations in our galaxy group back this up: The dozens of dwarf galaxies known to orbit in the Milky Way’s outskirts are distributed evenly around the galaxy, as are most of the dwarf galaxies seen around our nearest large neighbor, the Andromeda Galaxy (SN: 3/11/15; SN: 8/19/15).

But in the M81 group, the seven newly identified star clumps appear to surround a smaller member of that group, NGC 3077, which is about one-tenth the mass of M81. “The fact that the bigger thing doesn’t have more satellites,” Bell says, “nobody expects that.”